– Of Humans and Nature (solo exhibition). The Shop gallery, Sydney 2018. 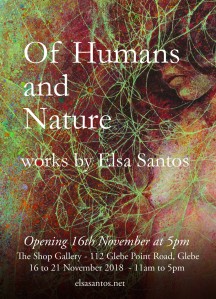 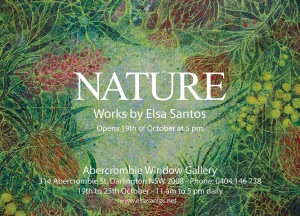 – November 2016 – One of my paintings is a finalist at The Greenway Art Prize exhibition 2016.

– October/November 2016 – I am exhibiting some of my work at the Affordable Art Market in Camperdown:

– December 2015 – I will be doing a solo exhibition at The Shop Gallery, in Glebe Point Road. Here is a link to the catalogue

– April 2015 – I did a workshop for children at my studio today. I got the children to work with oil crayons and it was lots of fun. Here are some pictures.

– March 2015, I took part in the 2015 Leichhardt Open Studio Trail. I was very excited to open the doors of my studio to the general public and I had an excellent response and feedback.

– March 2015. My painting “The Dream” was selected to take part in the All Women Art Exhibition – Light Space and Time Online Art Gallery.

– January 2015. Have been awarded subsidized studio space by Leichhardt Council. Total length of residency will be 12 months.

– December 2014 to January 2015. Two of my paintings at the Brunswick Street Gallery, Fitzroy.